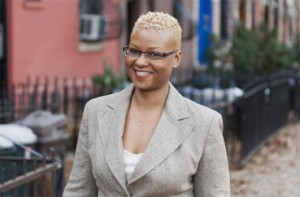 A self-described “child of the Civil Rights Movement”, Fox was born and raised in Manhattan to activist parents. She has lived in the 35

th District for the past 10 years, where she is an active member of Community Board 8 and is the chair of the Environmental/Sanitation Committee.  She has also worked for the New York City Council since 2006, first as the Legislative and Budget Director for Council member Melissa Mark-Viverito and then as Chief of Staff for Council member Jumaane D. Williams.

“The top five issues in the district hands down are education, development, affordable housing, small business and social services,” she says. “P.S. 9 is around the corner and they just lost Title 1 funding where the federal government gives extra money if you have a certain number of kids that require free breakfast and lunches. Because the neighborhood is gentrifying, they lost almost $400,000, which is a big chunk. We are gentrifying but we can’t raise that kind of money. Still, I believe every child deserves a quality education and it’s the government’s job to provide it.”

Fox said a whole generation of students suffered from mayoral control and she will fight to reform so that real experts and stakeholders in the community will have a stronger say as to what needs to happen to improve schools locally.

“I don’t have a master plan, but when I worked with Melissa and Jumaane we often heard from parents who feel very disengaged. Even in Prospect Heights there is a whole stretch of Section 8 housing and these are people who have been here and deserve to be and there is still a large swath of kids here that need our support,” she said.

On construction and development, Fox said she was opposed to how the Atlantic Yards project came about, but now that it’s here she will work to make sure it is done well and includes as many amenities for the community as possible.

“We need development. The city is hundreds of years old. We need to be investing in our infrastructure but the work needs to be done well. We need quality housing that lasts a long time with a foundation of infrastructure that the city can be built upon,” she said.

Regarding bike lanes, Fox noted she lived for a time in Amsterdam where everybody rides bikes, but how the lanes were laid out there is different to how they were laid out here. As such, Fox says that there is not a lot of distinction between cars, bikes and pedestrians, making roadways much harder to navigate, particularly for seniors.

“More thought has to be given on how to use the (public) space and accommodate everybody,” she said.

In total, Fox said she is a committed, passionate activist and leader with the skills and experience to lead the council in the direction it needs to go.

“I may not be very extroverted and brash, but I really connect with people on a one-to-one basis,” she said. “I’m really the best candidate to fill this position. I have the experience and commitment and skills to represent what I think is the best district in the city. I’m eager to get in there and really fight for the city where everybody gets a chance.”