As a nursing school student in Cameroon, Melissa Bime remembers watching helplessly as a mother struggled to find a blood match for her 5-year-old daughter, Rita. After three days of fruitless searching, Rita died. A week later, Bime discovered that a hospital 20 minutes away had the right blood all along. “At the time, I didn’t think much of it,” says Bime, 22. “I was too used to seeing people die.”

Rita’s death may be a tragic statistic, but thanks to Infiuss — the online blood bank Bime started in December 2017 — there is now hope for residents of Cameroon’s two largest cities. In the year since its launch, Infiuss’ motorbikes have delivered more than 2,300 bags of blood (sourced from three existing blood banks) to patients at 23 hospitals in Yaoundé and Douala. In 2019, Bime hopes to “double or even triple” these numbers, while also expanding to other cities in Cameroon and leveraging Infiuss’ database of donors to establish a physical blood bank owned by Infiuss.

“Access to blood before Infiuss was a dilemma for both physicians and patients,” says Dr. Iddi Faisal, a GP in Yaoundé who has used Bime’s service dozens of times. Cameroon doesn’t just have a shortage of blood (according to the Ministry of Public Health only 90,000 pints are donated annually, far short of the 400,000 required) but there is “no data” on existing blood stocks, says Faisal. “Infiuss changes lives,” he stresses.

Bime is an unlikely hero. Growing up with her lawyer-mom and an older sister in the regional capital of Bamenda (the Bimes are part of Cameroon’s politically marginalized Anglophone minority), she was surrounded by female role models. Her mother worked hard to ensure her daughters received the best education possible, but the family was “never rich” due to the number of pro bono cases she took on. “Mom was really content to be paid with a bag of beans,” says Bime, explaining that while her mother’s efforts didn’t make much of an impression at the time, the concept of social enterprise “must have got implanted in my head.”

The plan for Melissa was to follow in the footsteps of her sister, who’d qualified as a nurse and emigrated to the U.S. in 2007. But nursing school rerouted her. The system was “broken,” in her words, and what really got her down was that “everyone was OK with that.” When Bime graduated, she resolved not to work as a nurse. “It was just too hopeless.”

Instead, aged 20 and with no entrepreneurial background, she moved to Yaoundé (Cameroon’s French-speaking capital city), started a business called Social Ventures and taught herself French. An avid follower of blogs about raising funds for social enterprises, Bime knew she had something to offer to the area’s many entrepreneurs. “I saw people with incredible solutions to Cameroon’s problems but no idea how to get funding,” she says.

After grouping entrepreneurs according to discipline, Bime sought out opportunities and helped them to package proposals. One beneficiary was Fien Rosette, who’d given birth to her third child when she met Bime in 2016. Scandalized by the cost of baby food, Rosette took traditional pap (corn-based porridge) and made it more nutritious by adding groundnuts and moringa, among other ingredients. With Bime’s help, Kayvey Nutri Foods has become an international brand, sold in Cameroon, Mali and Chad. “Melissa took my business to the next level,” says Rosette.

“INFIUSS HAS CUT THE AVERAGE TIME IT TAKES FOR A PATIENT TO RECEIVE A TRANSFUSION FROM ABOUT A WEEK TO ONE HOUR.”

At Social Ventures, Bime worked with entrepreneurs across many sectors, but the businesses she backed had something in common: They offered simple solutions to pressing needs. “Once I got into a problem-solving mind-set, I started thinking about that little girl again. The solution was really simple,” she says. In theory, yes, but in practice, not so much. 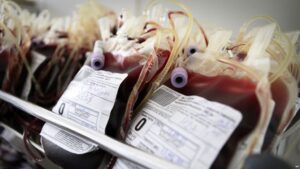 Blood banks in Cameroon will not release blood — no matter how dire the circumstances — until two or three replacement donors have been found, so Bime had to assemble a database of donors she could leverage (they’re up over 800 blood donors and growing). Once she’d convinced a few hospitals to sign on, she turned to implementing the logistics (setting up databases, kitting out motorbikes, training drivers) and getting the word out to doctors throughout the city. Raising the seed money was a family affair. In Cameroon, Bime explains, you can buy a motorcycle taxi and contact a driver who has to bring back an agreed amount of money at the end of each day. “In my case, it was about $10. My sister bought two motorcycles, so I was making $20 every day … After about six months, I had made about $5,000 from the motorcycles, and that was the capital I used to start Infiuss. I converted the motorcycles from serving as transportation and used them for blood delivery.”

Infiuss has cut the average time it takes for a patient to receive a transfusion from “about a week,” according to Faisal, to one hour. Well worth the $20 service fee they charge over and above the going rate of $40/pint.

Not that it’s all smooth sailing. Many challenges remain in a country where — according to Ntaryike Divine Jr., a science journalist based in Douala — doctor-patient ratios languish at “lamentable” lows, promising private initiatives receive “halfhearted government assistance” at best, and public misconceptions about the dangers of donating blood proliferate. Some Cameroonians don’t realize that the body replaces blood, others believe that taking blood “steals your spirit,” while still others steer clear of clinics to avoid learning about their HIV status.

But Bime refuses to let it get her down. With a staff of 13, she’s seeking to partner with more blood banks in Yaoundé and Douala while looking to expand the company’s footprint in Cameroon and beyond. (“It may actually be easier in other countries,” she says pointedly.) Meanwhile, to address the misinformation problem, she’s using both conventional channels (outreach in schools, churches) and Infiuss’ bilingual Android app.

At the same time, she’s forging ahead with plans to open what would be the country’s first privately owned blood bank. Due to regulations stipulating that any blood bank must be affiliated with an existing medical center, Bime has just opened a clinic — using part of the $100,000 Cartier Women’s Initiative prize Infiuss won in April 2018 — that offers general consultation, lab work and follow-up services. While revenue from the clinic will go partway toward paying for the blood bank, Bime will focus her powers of persuasion on “competitions, VCs and angel investors” to come up with the $200,000 required to establish a “rudimentary” blood bank. Infiuss, with revenue of $26,000 from both the blood services and the clinic, has yet to break even, but its founder expects to hit that benchmark in Q4 of this year.

And then Bime says she’ll turn her attention to other “big problems with easy solutions.” Seems problem-solving runs in her veins — and blood is just the starting point, she says. “My goal is to change the way health care works in Cameroon.”