African-American Lucy McBath is a Democrat from Georgia’s 6th Congressional District who failed to get a majority of votes during the Primary. She had three contenders and got a plurality of the votes. She faces a runoff this month. McBath is running on a “gun safety” platform. Her 17-year-old son was shot and killed by a white man at a Jacksonville, FL. gas station. His murder became a catalyst for the Black Lives Matter movement.

True or False: Everyone’s talking about Kevin Baker’s Harper’s magazine cover story, THE DEATH OF A ONCE GREAT CITY. An interesting read with laser- like analysis of what’s gone amiss in the 5 boroughs re: government, education, transportation, politics, business, real estate.

The Village of Harlem is mourning the loss of one of its most beloved citizens, Beverly Alston. A mother and educator, Beverly wore many hats.   She was a politically engaged community leader, a devout Democrat who had a “fire in the belly” for all of the causes she espoused, which were manifold, particularly those related to her native Harlem, its culture and sustainability.   A president of the Jackie Robinson Park Conservatory, a life member of Rev. Sharpton’s National Action Network, she was also a Superintendent of the NYS Office of General Service in Brooklyn.  Her funeral service was held at Harlem’s historic Abyssinian Baptist Church on July 17.

Essence Ventures CEO Richelieu Dennis launched the $100 million New Voice Fund for Women of Color which was announced at the recent Essence Festival in New Orleans, Louisiana. The Liberian-born Dennis has entrepreneurship in his DNA. He is the Shea Moisture and Sundial Brand founder, which was sold last year to Unilever before he acquired Essence Communications from Time, Inc., restoring the Essence franchise – magazine and annual New Orleans Festival – to Black ownership. Dennis enthused: “The fund is to support Black women-owned businesses.   It will provide access and capital to women, and will target start-ups, existing businesses and community-based enterprises owned and led by Black women.”

Stephen Byrd’s Front Row Productions returns to Broadway with a drama, AMERICAN SON, starring Kerry Washington and Steven Pasquqe on November 4. Kenny Leon directs this piece by playwright Christopher Demos-Brown. Story is a “gripping tale of two parents in our national divide with their worst fears hanging in the balance.” 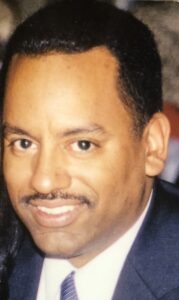 Keith Taylor, former NYC Department of Correction Assistant Commissioner, joined the New York Guard State Defense Force, an organization of volunteers which works in tandem with the NY National Guard. A force of 500 uniformed volunteers organized as a military unit, the NY Guard works with the NY National Guard during NYS emergencies. Taylor came aboard as an instructor dispensing info about professional development, education and will train officers and noncommissioned officers. A Harlem homeowner and a member of Community Board 10, Taylor holds a Doctorate in Education from Columbia University.

Summertime and the living is easy, and it is time to travel. New Yorker Henrietta Lyle visits South Carolina……..Dr. Sandra Epps traveled to France………Ambassador Shirley Barnes was on holiday in France and Spain….. Cove Lounge owner Alyah Sidberry traveled to LA with her sons Maxwell and Kai who were pleasantly surprised when their dad Kendall arrived at the end of the week. Globe-trotter Pierre Thiam visited Hawaii, Abu Dhabi and Zimbabwe.

Dee-Ann Kentish Rogers, 25, was crowned Miss Universe Great Britain, a first for a Black woman, on Saturday, July 14. Dee-Ann’s next stop is the 2018 Miss Universe Pageant, which will be held in the fall. An Afro-Caribbean born in Anguilla, a British territory, she has earned a law degree at the University of Birmingham and wants to be a barrister.

Last week’s item about the UNCF, “A Mind Is” Hamptons Benefit on August 18-19, was not specific about the roles that Ed Lewis, co-founder of ESSENCE, and Dr. Johnnetta Cole, former President of Spelman and Bennett Colleges, would play. They are event honorees. Founded in 1944, the United Negro College Fund (UNCF) is the nation’s largest and most effective minority education organization. It is the place to go for college scholarship assistance. [Visit UNCF.org/NYHamptons]

The NYC Restaurant Week summer session runs from July 23 to August 17. More than 380 restaurants participate at prix fixe restaurant promotions, including   2-course lunch at $29 and 3-course dinner at $42, except Saturdays and Sundays.     [Visit nycgo.com/nycrestaurantweek]