By now, the world knows about Nikolas Cruz, the 19-year-old former student at Marjory Stoneman Douglas HS in Parkland, Florida. On Valentine’s Day he killed 17 people — including students, teachers and other staff —with an AR-15 assault rifle designed for combat and known for speed, light kickback and for easily rending flesh and bone. A local white supremacist group, The Republic of Florida, which seeks to create a “white ethnostate” out of Florida, has said that Cruz is a member.

The world is also coming to know the names and faces of young people in Florida and across the U.S. who have decided to do what adults in charge have not done — force President Trump and the GOP to wean from the teat of the NRA and substantively address gun violence. We will be hearing a lot more from these angry and determined students. 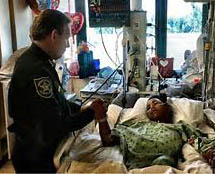 We’ve heard less, however, about Anthony Borges. If anyone deserves the title of hero, it’s Borges. He was shot five times in the back as he attempted to lock a classroom to prevent Cruz from entering. He may have saved the lives of the 20 students inside. Likely, Borges was a welcome target for the crazed white supremacist. A bullet went through Borges’ back, his left thigh was shattered, and he was shot in both legs. He clung to life for several days and it now appears that he will survive. A GoFundMe page has already raised $198,000, but more may be needed to cover his medical expenses.

Angry students have been walking out of classrooms across the country in protest. In Washington, D.C., students quickly formed an organization called Teens for Gun Reform. They staged a lie-in on the White House lawn on Presidents’ Day and the message on their Facebook page read: “By doing this, we will make a statement on the atrocities which have been committed due to the lack of gun control and send a powerful message to our government that they must take action now.” Following the lie-in, protesters marched around the premises shouting, “Shame on you” and “Disarm hate” toward the White House. The group also chanted “No more deaths,” “Am I next?” and “Hey, hey, NRA, how many kids have you killed today?”

A formal and coordinated walkout is organized for March 14th when students, teachers and other staffers at many schools across the nation will participate in the      “Enough! National School Walkout” to protest lax gun laws at 10am in each time zone. Protestors will wear orange and the walkout will last 17 minutes – one minute for each of the students murdered in Florida. Students are being helped in the planning by organizers of the National Women’s March. Ten days later on March 24th, a “March for Our Lives” is planned on Washington, D.C. Actor George Clooney and his wife Amal are donating $500,000 to this protest, which will be led by Stoneman Douglas High School students. Hearing that, other big names came on board with donations, including Oprah, Steven Spielberg and others.

Along with calling for a ban on assault weapons and greater protection overall, the students want to know how officials could leave them in harm’s way when there was ample evidence that this tragedy might occur. On January 5th, a person close to Cruz called the FBI tip line to report that Cruz had “a desire to kill people, erratic behavior and disturbing social media posts,” and that there was a “potential of him conducting a school shooting.” The Broward County Sheriff’s Office had been called to Cruz’s home 39 times since 2010 over reports of a “mentally ill person” and “domestic disturbance.” He posted a photo of himself on social media standing in his yard aiming a rifle, wearing nothing but boxers and a Make America Great Again baseball cap.

Meanwhile, the president has done little more than spout rhetoric, with his avoidance of the very mention of the word “gun” sparking both outrage and ridicule.

“No child, no teacher, should ever be in danger in an American school,” said Trump. But a year ago, less than two months into his administration, Trump rolled back an Obama regulation making it more difficult for the mentally ill to purchase guns. The Trump Administration has also proposed $680 million in cuts in 2019 to the Substance Abuse and Mental Health Services Administration amidst a reported growing mental health crisis among millennials. The Affordable Care Act mandated coverage for mental disorders that had previously been denied, including anxiety, bipolar disorder, depression, obsessive-compulsive disorder and schizophrenia. No more.

Gun control advocates say that much is needed across the board and that sustained attention must be paid if this longstanding crisis is to be properly addressed at long last. Young students, angry and fearful for their lives, appear ready to go the distance.