During the voting period of March 26th through April 3rd, over 67,000 New Yorkers voted to allocate $38 million dollars for locally developed capital projects across 28 Council Districts in New York City.

“This cycle also featured key innovations in voter engagement –  including remote voting, digital ballots and pop-up poll sites – that allows our city to test new tools to increase civic participation. Participatory Budgeting brings the full diversity of New York City to the decision-making table and I thank everyone who participated for helping grow and strengthen this deeply democratic process,” said Speaker Melissa Mark-Viverito.

“I was proud to implement Participatory Budgeting in the 35th District for the very first time to gain key insight into the needs that exist within the Brooklyn neighborhoods of Fort Greene, Clinton Hill, Crown Heights, Prospect Heights and Bedford-Stuyvesant,” said Council member Laurie A. Cumbo.

“Our nineteen projects ranged from public safety enhancements to technology upgrades on our city streets, housing developments and public schools. This was an exciting time for the diverse voices of my district to allocate real money towards real projects as a reflection of real power. With 1,660 votes in our inaugural year, this endeavor was overwhelmingly successful thanks to the participation of our youth, seniors and families. Congratulations to this cycle’s winners: the Willoughby Senior Center, Public Schools 9, 16, 20, 375 and 532.” 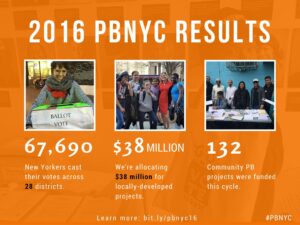 Council member Robert Cornegy said: “We are proud of the positive results from the inaugural undertaking of the Participatory Budgeting process. This experience has allowed us to engage youth in the city’s budget procedures and we applaud the intergenerational show of democracy. Our winning projects will be beneficial to all members of the community and we look forward to its implementation.”

Participatory Budgeting is a grass-roots process through which community residents vote to directly allocate at least $1 million in capital funding per district toward proposals developed by the community to meet local needs.  Through a series of public meetings, residents work with elected officials throughout the year to identify neighborhood concerns and craft proposals to address them. Residents then decide which proposals to fund through a public vote.

Brooklyn Borough President Eric Adams said: “I am proud that Brooklyn has embraced Participatory Budgeting like no other borough, with residents in 10 council districts getting empowered to design and vote on transformative local projects funded by their hard-earned tax dollars. The $1 million leveraged through my capital budget amplified the power of everyday Brooklynites in this process, and I look forward to seeing all of the additional community improvements come to life in neighborhoods from Gravesend to Greenpoint. Civic engagement is the fuel that powers our democracy and the City Council should be commended for their commitment to supercharging that fuel through PB.”

For the 2015-2016 cycle, 28 council members facilitated Participatory Budgeting in their districts:

A map of winning projects and full voting results by district can be viewed at labs.council.nyc/pb/.

Voting in Participatory Budgeting is open to all residents of participating districts 14 years of age and older. The sole identification requirement is proof of residency in the district, removing traditional obstacles to full civic participation such as youth, income status, English-language proficiency and citizenship status.

In future issues, Our Time Press will feature some of the winning Participatory Budgeting projects.