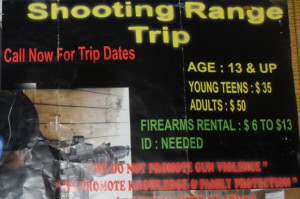 Mothers, be very aware. As day bus trip season ramps up, someone got the bright idea to advertise Shooting Range out-of-state day trips for 13-year-olds. A full-color glossy poster promoting the Shooting Range trips was recently found on a tree near the intersection of Livonia and Rockaway Avenues.

Ironically, the phrase “We Do Not Promote Gun Violence; We Promote Knowledge & Family Protection” is printed in red ink with the name of a local rapper who is identified on the poster as “Chief of Arms.”

An inquiry found the day trips are to Philadelphia, Pennsylvania where guns and gun training are legal. NYC has gun ranges, but someone must have a gun license in order to use them.

“This makes no sense,” said community activist Tony Herbert. “Why are you telling a 13-year-old you will take them from Brownsville to learn how to shoot an AK47?” Herbert said “the children would come back with an appetite, because once they know how to shoot, they will want to shoot. They are going to want a gun.”

“You are sending the wrong message to a teen,” Herbert said. “If this was catered to an adult, a responsible adult, it would be a totally different thing. This is irresponsible, at best. Clearly, these are assault rifles. These are not hand guns. What is the point of teaching a 13-year-old how to shoot an AK47?”

The bottom line for Herbert is “They need to re-think this, and restrict the age at which kids are allowed to do this.”

With years of experience mediating violence, Herbert said, “Considering the amount of gun violence taking place in central Brooklyn – Brownsville, East New York, East Flatbush, and Bed Stuy – to take young people out of our community to learn to shoot assault weapons for whatever purpose is irresponsible. This practice has to be stopped immediately. As a responsible adult, I feel this should not be allowed. There should be some legislative answer to this in order to provide kids with better opportunities so they don’t have to find themselves going into another state where they can actually get access to a gun and bring it back because they have had an urge and opportunity to shoot. Unless they are going into the military, what is the need to teach a kid to shoot an AK47? There is none.”

Herbert lamented, “Unfortunately, it won’t be the people they are trying to hit that will get killed. It will be some innocent mother, grandmother, kid, or woman who happens to be out grocery shopping who would get hit be a bullet. It might be a grandmother sitting in her apartment watching TV only to catch a bullet and get killed. High power weapons shoot through brick.”

Herbert added, “This would create home-grown terrorists going around shooting in our community. The last thing we need is a war between people in the community and the Police Dept.”

According to the website printed on the poster, the organizer is a rapper/activist who is using videos to recruit young people. Apparently, in January 2012 the organizer decided to form a gun club. NYPD cannot do anything about the Shooting Range day trips because they are not breaking the law. So far.

This process of recruiting teens to use assault weapons reminded Herbert of African warlords like Charles Taylor or Joseph Kony who armed children in Sierra Leone, Uganda, and the Central African Republic. “Here you are creating a soldier,” Herbert said. “What happens when the soldier is not mentally prepared to deal with the issues and concerns and misconstrues the information being passed on to them? How do we control that so another innocent life isn’t killed like Zurana Horton?”

Herbert issued an open plea. “My request would be to exclude young people from participating in the gun club,” he said. “I don’t think teenagers are well-equipped mentally how to progress and grow in our communities when the only thing they know how to do is shoot a gun.”